Her Majesty The Queen at Epsom Downs Racecourse 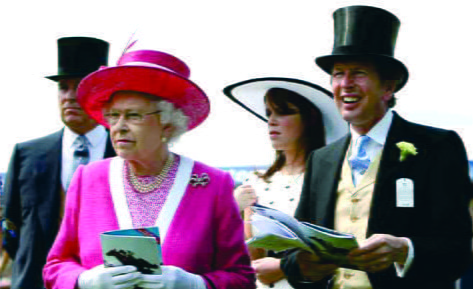 Nobody can match Her Majesty The Queen’s longevity as a racehorse owner, for as we enter the 2015 season her horses will be competing at the top level for the 67th consecutive year.

Her Majesty’s involvement in racehorse ownership began when Clement Attlee was Prime Minister in 1949 and has spanned eight decades, featuring many highlights at Epsom Downs Racecourse, including a pair of victories in the Group One fillies’ Classic, the Oaks.

However, it is Flat racing’s most celebrated prize of all that has famously proved elusive. Her Majesty may have had 10 runners in the Derby, among them a runner-up and a short-priced favourite, but she has still to taste victory in racing’s premier Classic.

Her Majesty’s golden era as a racehorse owner was in the 1950s. Just four days after her Coronation, Her Majesty was at the sun-drenched Epsom Downs on 6 June, 1953 with a reported crowd of 750,000 people to witness her first Derby runner, Aureole. Sent off at 9/1 for trainer Sir Cecil Boyd-Rochfort and jockey Harry Carr following the colt’s Lingfield Derby Trial victory, Aureole finished four lengths second to Pinza – the closest Her Majesty has come to victory in this most famous Classic. Pinza’s winning jockey, Sir Gordon Richards, tasted his first Derby success at the 28th attempt having been knighted by The Queen just days before the victory.

In 1954 Her Majesty experienced her first major victory at the historic course. Aureole, bred by The Queen’s father King George VI, returned to Epsom a year after his Derby second to win the Coronation Cup easily as a four-year-old. He also won the 1954 King George VI & Queen Elizabeth Stakes at Ascot and went on to be champion sire in 1960 and 1961, with his best progeny including the Derby winner St Paddy.

Atlas, fifth in the 1956 Derby, and Above Suspicion, who occupied the same position three years later, were the best of The Queen’s five other Derby runners in the 1950s. She was not represented again in the Derby until English Harbour finished 18th of the 25 starters in 1978. A year later Lester Piggott partnered the 6/1 joint third favourite Milford to take 10th position, while in 1981 Church Parade came fifth behind the runaway winner Shergar.

It was in 1957 that Her Majesty first enjoyed Classic success in the Oaks, thanks to Carrozza, who was leased to the Monarch by the National Stud. The daughter of Derby winner Dante headed to Epsom on the back of fourth place in the mile Classic, the 1,000 Guineas at Newmarket and sported a white cap, denoting The Queen’s second colours. Her Majesty’s other runner, Cheshire Oaks heroine Mulberry Harbour, was sent off second favourite and finished last of the 11 runners.

Her Majesty was accompanied to Epsom that day by Queen Elizabeth The Queen Mother and Princess Margaret and they cheered home the Noel Murless-trained Carrozza, who started at 100/8, and held off Silken Glider by a short-head under a youthful Lester Piggott who had gone for home two furlongs out. The Daily Telegraph’s correspondent Bill Curling described the race as “one of the most exciting I have ever seen” as the winner prevailed by inches in a photo-finish.

He wrote: “Throughout the last desperate 100 yards, it seemed as if Silken Glider would prevail but neither Lester Piggott nor Carrozza would give in. Piggott reminded his mount of her responsibilities, then sat still. But in the last 20 yards with hopes of victory fading, he rode like a man inspired, almost willing Carrozza to win. The Australian Brownie Carslake in his heyday could not have squeezed more out of the filly. Carrozza and Silken Glider flashed past the post together. There was a momentary hush. I thought from my position high up in the press stand that Carrozza had hung on by inches, a colleague on my right favoured Silken Gilder. The majority of people hoped for the best and feared the worst.”

Amid huge cheering, Her Majesty led her three-year-old filly into the famous winner’s enclosure at Epsom Downs and it was two decades later, appropriately the Silver Jubilee year of 1977, that Her Majesty enjoyed her other Oaks success. That victory came from Dunfermline, a filly bred by The Queen’s Royal Studs at Sandringham and trained by Dick Hern, who headed to Epsom Downs on the back of an emphatic success in the Pretty Polly Stakes at Newmarket. Dunfermline prevailed by three quarters of a length from Freeze The Secret with The Queen watching on television. The filly had to be brave and game under Willie Carson as she was bumped early on and then badly baulked at the top of the hill. She went on to confirm her brilliance when beating Alleged in the final British Classic of the season, the St Leger, at Doncaster.

Her Majesty narrowly missed out on a third Oaks winner in 2001 when her home-bred Flight Of Fancy, trained by Sir Michael Stoute, had a troubled passage under Kieren Fallon when finishing second, one and a quarter lengths adrift of Imagine. It was 30 years on from Church Parade running in the 1981 Derby before Her Majesty had her next Investec Derby runner in 2011. The newly-married Duke and Duchess of Cambridge and Prince Harry were among family members who came to Epsom to support Her Majesty and Carlton House.

The Street Cry colt carried with him a greater sense of expectation than any of his predecessors. An American-bred who had been given to The Queen by Sheikh Mohammed bin Rashid Al Maktoum as a yearling, he was sent off the 5/2 favourite on the back of an impressive Dante Stakes victory at York. There was huge media interest ahead of the 2011 Investec Derby, but it was not to be a fairytale result because Carlton House, ridden by Ryan Moore and trained by Sir Michael Stoute, lost a shoe and finished third, a length behind the successful French raider Pour Moi.

Away from the Investec Derby Festival, Her Majesty has also enjoyed success in the Investec Derby Trial, which takes place at Epsom Downs in April. Sierra Nevada won the race in 1955 and Miner’s Lamp followed up three years later, going on to win the Princess Of Wales’s Stakes at Newmarket and then becoming a stallion in Japan.

In 1963, Aubusson, by Aureole, made all to win the St James Stakes over an extended mile, by a short-head, while Gold Aura, another son of Aureole, captured the 1964 Great Metropolitan Handicap, then run over 18 furlongs at the April meeting, and returned to Epsom Downs for another victory over the same trip in the Rosebery Memorial Handicap in June three years later. Both were trained by Sir Cecil Boyd-Rochfort.

Another home-bred, two-year-old Skerry, was the decisive winner of the five-furlong Westminster Stakes for trainer Ian Balding during the 1965 April meeting which started on a Tuesday and covered three days. The now-defunct Warren Stakes, once also staged at Epsom in April, was won impressively by the Dick Hern-trained Duke Of Normandy in 1978. The filly Starlet, trained by Lord Huntingdon, took the City and Suburban Handicap at Epsom’s April meeting in 1990 and progressed to win at Group Two level in Germany later that season.

Her Majesty started her Diamond Jubilee celebrations on Investec Derby Day at Epsom Downs in 2012, when Katherine Jenkins sang the National Anthem.

Though the Investec Derby continues to elude Her Majesty, she had a winner at Epsom Downs on Derby Day twice in the 1990s, thanks to Enharmonic (1993) who won the Group Three Diomed Stakes by a head, and Arabian Story (1997), who made all for an easy win in the Paknet Rated Stakes.

Frankie Dettori was the successful jockey both times, while the horses were saddled by Lord Huntingdon.

Estimate gave The Queen her biggest success in recent years when taking the Group One Gold Cup at Royal Ascot in 2013.

 The Derby record of The Queen’s horses