The late Pat Eddery has been inducted into the QIPCO British Champions Series Hall of Fame – the official Hall of Fame for British Flat racing.

Eddery, who passed away in November 2015, became Champion Jockey on 11 occasions between 1974 and 1996, racking up more than 6,000 winners in his career. 4,632 of these were recorded in Great Britain, a figure exceeded only by the legendary Sir Gordon Richards, who finished with 4,870.

Among his 4,632 British wins were 14 Classics, including three Derby winners in Grundy, Golden Fleece and Quest For Fame. Grundy went on to win the Irish Derby and the King George VI & Queen Elizabeth Stakes in the same year of 1975, with the latter known as the ‘Race of the Century’, a thrilling duel with the St Leger winner Bustino in which Eddery had to use all his tactical nous to drive his mount to victory.

His daughter Natasha Eddery-Dunsdon, a competing showjumper, said: “He was, and always will be, one of the all-time greats. When I think about what he was like as a jockey, I think about his quiet concentration, his focus, the determination to win. That’s what set him apart, his desire to win and to beat his comrades – winning was everything to him, second best just wasn’t an option.

“He had the best hands of any jockey, he was a kind rider, intuitive, he just connected with horses. If he were riding a puller, he’d simply give the horse the rein and drop his hands on the neck – I’ve personally tried this and I always get run away with – but they never did that with dad, they just stayed totally relaxed.

“Entering the Hall of Fame would have made him so proud; I only wish he were still here to experience this special moment. It’s one myself and my family will cherish.”

Jockey Frankie Dettori said: “We used to call him ‘God’ because he was like God.”

Four-time Champion Trainer Richard Hannon Sr, who Eddery rode for many years, said: “I’m sure Pat would have loved to have been inducted into the Hall of Fame. It’s nice to be remembered. He was a very good jockey, he was very good with horses and he had a great memory of them too. If he rode one 18 months before, he’d know exactly all about the horse. He had a great brain.

“You didn’t have to tell Pat anything really. He just went out and did his job. As a trainer you do the job to ensure the horse is fit and everything is fine, but he used to go out and do his own thing, however the race worked out. That makes a jockey for me – if the race doesn’t go right for you, you think of another way round it.”

As well as the aforementioned British Classic winners, Eddery was associated with many other Champions, including El Gran Senor, Zafonic, Danehill, Sadler’s Wells and Warning.

However, his most famous association was no doubt with the mesmerising Dancing Brave [main picture, top], one of an incredible four Prix de l’Arc de Triomphe winners for him in the 1980s.

The 1986 renewal of the Arc included the likes of Derby winner Shahrastani, Prix du Jockey Club winner Bering and the highly-fancied German-trained Acatenango. With just three furlongs left, it was difficult to see where the 11/10 favourite Dancing Brave was in running. However, Eddery timed his run to complete perfection, with a white, green and pink flash flying home on the outside to round all his top-class rivals and sweep to victory. It was a track record at the time and one that lives long in the memory for those attending and watching on television.

In addition, Eddery helped British trainers gain landmark first wins in the Breeders’ Cup Turf in 1985, aboard Pebbles and in the 1986 Japan Cup, on Jupiter Island, both for revered trainer Clive Brittain.

For good measure, in 1990 he also become the first jockey since Gordon Richards 38 years earlier to chalk up 200 winners in a season, finishing with 209; his highest seasonal total.

Eddery’s riding style in tight finishes made him instantly recognisable, as he would often bounce in the saddle when requiring more from his mounts. It was unbelievably effective, with his phenomenal achievements speaking for themselves and making him a firm favourite amongst racing fans.

In recognition of Eddery’s posthumous induction into the QIPCO British Champions Series Hall of Fame and to mark his achievement, his family will be presented with a specially commissioned medal, designed by Asprey and unique within British racing. This medal will be displayed as part of a special Hall of Fame exhibition at QIPCO British Champions Day, which takes place at Ascot Racecourse on Saturday 16th October.

Clive Brittain, trainer of Pebbles, with whom Eddery won the Champion Stakes and Breeders’ Cup Turf in 1985 said: “You got exactly what you paid for with Pat. He gave every horse a professional ride. He’d give good feedback too; he was good at assessing the horse’s distance, ground conditions – he covered it all. He was worth every penny.

“You never gave Pat orders – you just told him what the horse was like and left the rest to him. You couldn’t pin him down to instructions before a race. Horses were always willing to run for Pat.

“When he rode for you, you got everything you’d want from a jockey. Everything he did on the horse’s back came so naturally to him.”

10-time Champion Trainer Sir Michael Stoute said: “I think he was a very natural and gifted horseman. He was absolutely dedicated to the job and brimmed full of talent.

“The racing fans adored Pat because he put so much into it. He was such a competitor; you couldn’t see an Eddery horse that hadn’t really had an energetic ride. He was just so natural and his stamina was remarkable; the number of races he rode in per season in England and abroad was prodigious.”

Brough Scott, Racing Broadcaster, Author and Journalist, and Hall of Fame Judging Panel said: “Pat Eddery was the most natural jockey I have ever seen – talent, temperament and an unquenchable appetite for the riding game.” 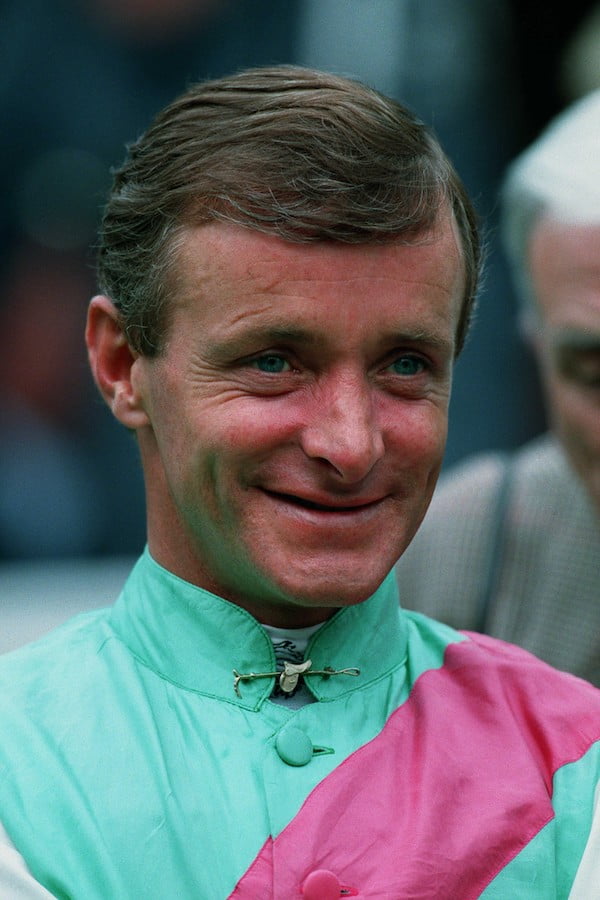 Perfect Pat, Pollyfilla Pat, God; just a few of the nicknames my father acquired in the weighing room. No doubt these names still echo around British racecourses today; he was, and always will be, one of the all-time greats. When I think about what he was like as a jockey, I think about his quiet concentration, his focus, the determination to win. That’s what set him apart, his desire to win and to beat his comrades – winning was everything to him, second best just wasn’t an option.

The hunger to win certainly never faltered, but he also had a unique gift; the power of patience. There are so many races to recall upon when dad would sit and wait, he’d never pull out too soon, he stayed calm and knew the right moment to make his move – sometimes just inches away from the line; the 1985 Breeders Cup win on Pebbles, the 1986 l’Arc de Triomphe on Dancing Brave, the 1997 Ascot Gold Cup on Celeric – just a few of the superb races where his undeniable talent and bravery came into play.

He had the best hands of any jockey, he was a kind rider, intuitive, he just connected with horses. If he were riding a puller, he’d simply give the horse the rein and drop his hands on the neck – I’ve personally tried this and I always get run away with – but they never did that with dad, they just stayed totally relaxed.

He had a particular fondness for fillies, which isn’t the case for a lot of riders in the equestrian world. Dad never spoke that much about individual horses, but one he recalled with warm admiration was Bosra Sham. The beautiful, delicate and feisty chestnut filly who touched his heart. There was a sweet moment caught on camera as he pulls up after the Champion Stakes at Ascot in 1996 and you can see him softly stroking her neck; a rare and sweet outward display of his affection for her.

Dad certainly had a flair for pranks in, and out, of the Weighing Room, but most of the time he was a very quiet, private man; he let his success do the talking. Luckily, he never struggled too much with his weight. He enjoyed food, although he never finished an entire plate. He had a real sweet tooth; choc ices and cream cakes were his favourites – we would drive 20 minutes to the bakery just to buy an eclair or a baked cream bun. He always had sweat in the sauna before the races, but this was more a ritual rather than to shed the pounds, it was his quiet time to think and mentally prepare.

His style certainly can’t be replicated, that unusual bounce he did as he pushed a horse out, but it’s what made him unique. Entering the Hall of Fame would have made him so proud, I only wish he were still here to experience this special moment. It’s one myself and my family will cherish.