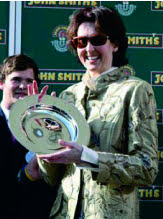 The Grand National-winning trainer of 2009 might well have already equalled Jenny Pitman’s record of two wins had she not had the desperate luck to lose Nil Desperandum in the 2007 Midlands Grand National a month previously when he was trading at a low price in the ante-post market for the big race.

The talented stayer had been placed fourth to Numbersixvalverde at Aintree the previous year when trained in Ireland by another woman, Frances Crowley, and had won the marathon Eider Chase (at 4 miles) for Venetia in February. Such is racing. She remains however one of only two women to have trained a Grand National winner.

Her nine-year-old French-bred Mon Mome had form in 2009 which made his 100/1 price seem very generous in retrospect, including a respectable 10th in the previous year’s running, and in the current season starting favourite for the Welsh Grand National after a good win at Cheltenham in the Listed 3.2-mile chase at the December meeting; he had a few wins and a string of places in the previous few years. He later confirmed his class by placing 3rd in the 2010 Cheltenham Gold Cup, although he fell in that year’s Grand National and will sadly be unable to compete this year due to a minor setback.

Before that, Venetia’s training record in the race had been little less encouraging than her record as a rider: in 1988 she fell at Becher’s Brook in her sole attempt on Marcolo and was knocked out. A further fall at Worcester soon after in which she broke her neck persuaded her to give up riding, and turning her mind to training, she spent several years learning the ropes from a variety of trainers, including Barry Hills, Champion NH Trainer Martin Pipe, and a spell in Australia with Colin Hayes. Taking out her trainer’s licence in 1995, she set up in the yard on the family estate at King’s Caple in Herefordshire, soon sending out jumping stars such as the grey Teeton Mill, winner of the Boxing Day feature King George VI Chase, and the outstanding mare Lady Rebecca.

Besides Venetia’s General Wolfe, her first finisher in 12th, there were three other horses trained by women involved in the 1999 running of the Grand National: it was Jenny Pitman’s last attempt, and Julie Camacho ran Avro Anson, but Sue Bradburne notched up an envied second place with Blue Charm. Things were really starting to change.

In 2005 Mon Mome was, however, only Venetia’s fourth runner to complete the Grand National of 13 in total since 1997. “You always go with hope,” said the trainer of her 2006 win, “but it’s a rare race that we had been significantly unsuccessful in, in the past. One has had hopes previously and they have been dashed good and proper, so one eventually learns not to raise one’s hopes too high.”

From her unique perspective as Lady Amateur and trainer, she points out: “At the time of Marcolo, I was purely focused on the riding so just being in the race was a dream. One is far more involved as a trainer, rather than riding. As a trainer, one is training the horse and preparing it for its entire career, whereas when you’re riding, you just show up on the day.”

Personal experience also stands her in good stead with her jockeys. “I try to be as specific as possible and I think I gave the same instructions to both jockeys,” she recalls. “That was to go round the inside and to remember that daylight in front of you, going into those fences, is gold dust. I also advised them to always try and avoid following other horses too closely.” Luck plays a significant part in any Grand National win, but staying out of trouble is half the battle.

In 2009 as usual Venetia watched the race from high in the Owners’ & Trainers’ stand. “Mon Mome was drawing clear before I realised, crikey, he’s actually going to win it… It was a complete feeling of elation when he crossed the line and also an element of incredulity. I turned to Mrs Bingham, who was beside me, and said ‘right, you’ve now got to run as fast as you’ve ever run’. We had all those stairs to run down and I half expected to turn around and see her bouncing down the bannisters behind me!”

It was the usual tremendous crush and pandemonium as policemen took charge of the winning ‘connections’ and tried to keep the voracious media at bay. “We ran down and went out on to the course to greet the horse coming back. Fortunately, they keep the horse out on the course for a little while so that gave us time to get down there. It was an unforgettable experience” added the thrilled trainer.

Luckily Venetia was as always stylishly and immaculately turned out, this day in a beautiful brocade-style embroidered spring coat with a buff satin sheen, and she looked a picture in the ensuing group photos. Both ladies and their jockey Liam Treadwell, who had until recently been the yard Conditional and was having his first ride in the race due to his replacement being injured, were immediately whisked off to a full-scale press conference.

The trainer has fond memories of the peripheral fun which makes winning the race so memorable. “[Sponsors] John Smith adorned the horsebox with banners saying ‘Grand National Winner’, so I think on the horse’s journey all the way down the M6 and M5 he was being greeted by passing cars with the tooting of horns and all sorts of things. They had a fairly melodious journey back.”

That night she held an open bar in the local pub, and the following morning the entire village was invited to a party in the garden of King’s Caple where Mon Mome was paraded as the local hero, and his elderly owner was happily feted, including by fellow owners in the yard who had all been rung as soon as the horse passed the post. “A friend, who was at dinner, has a light aircraft and asked if I would like him to come and do a loop-the-loop of victory with his plane and I said ‘you bet!’ added Venetia. “That was great fun.” Rumour has it that the trainer also celebrated with a powerful new model of the racy sports cars for which she is also famous.

Such high profile victories are manna from Heaven for a trainer’s career, as well as due reward for all the long hours, heavy responsibility, bitter disappointments, and lonely worry of training horses. Venetia reflects on the unexpected victory: “Mon Mome’s Grand National win is the pinnacle of my career to date. He can be Mister Angry in his stable and is quite protective of his den, but he is quite cheerful and enthusiastic when he is out of his box. He has fulfilled a dream. Mrs Bingham has been with me as an owner since the early days. She has had nothing as good as Mon Mome, even without the National win.”

What to Wear to Goodwood Racecourse https://eclipsemagazine.co.uk/what-to-wear-to-goodwood-racecourse/

What to Wear to Sandown Park Racecourse https://eclipsemagazine.co.uk/what-to-wear-to-sandown-park-racecourse/

What to Wear to Newcastle Racecourse https://eclipsemagazine.co.uk/what-to-wear-to-newcastle-racecourse/