Looking forward to the Gold Cup at the Cheltenham Festival 2021, Joe Tizzard assesses the chances of Native River and Lostintranslation for the race, writes Nick Seddon.

Joe Tizzard is confident that the 2018 Cheltenham Gold Cup winner Native River is still a force to be reckoned with, as he bids to build on last month’s success in the rearranged Grade Two Virgin Bet Cotswold Chase at Sandown Park by winning the Blue Riband race for a second time on Friday 19th March.

The 11 year old missed last year’s renewal through injury but he has a fine record in the Cheltenham Gold Cup, placing in the first four on each of his three runs in the race to date.

And after returning to winning ways in fine style last month in the rearranged Grade Two, Tizzard feels that there’s no reason why Native River won’t be on the premises once again.

He said: “He’s been absolutely bomb proof for a couple of years, and has probably gone under the radar a little bit. He did nothing wrong last year and was two from two before just slightly tweaking a tendon in the Denman Chase, and then he came back and ran a blinder in the Many Clouds (at Aintree in December).

“The Cotswold being at Sandown really suited him and ticked all of his boxes, and he’s the highest rated chaser in England at the moment and he deserves it. In twenty runs? over fences his worst placing is fourth, which was in a Gold Cup, so that just shows you how good a horse he is.

“I think nowadays he would need a bit of soft ground just because anything else would be perhaps too quick for him and with the soft ground he can just maintain that gallop. I think that the horse is performing every bit as well as when he won a Gold Cup, I just think he’s a bit more ground dependant at this stage.

“The interesting thing about him is he’s not slow, he can maintain that gallop for three and a quarter miles. He’s just a warrior and if he’s still close enough at the bottom of the hill, he’ll be doing his best work up the hill. If he just gets his ground a little bit to help that, it slows the rest down.

“Native River will run his race, that’s the thing. He doesn’t run a bad race so he will go there and perform. He’s a pretty straightforward horse to train in that sense in that he’s very tough and he doesn’t need to do anything special to keep him right, he just loves his day-to-day routine and looks particularly well.”

Tizzard will also send last year’s Gold Cup third Lostintranslation, who he feels has every chance of outperforming his current odds of 33–1 for the Grade One contest.

The nine year old has disappointed on each of his three starts so far this campaign, coming home a distant fifth in last month’s Grade Two Denman Chase at Newbury in the latest of those outings, but Tizzard feels that he’s a horse that is still working his way back to full fitness.

He said: “It hasn’t been straightforward to be honest since the Betfair Chase last year. He disappointed in the King George and then bounced back to a fantastic run in the Gold Cup last year and then this year just hasn’t quite happened for no particular reason.

“Looking at the Denman last weekend, I actually think that was purely down to fitness. He blew very hard, and he’s a big gross horse that hasn’t had a race properly since the Gold Cup last year.

“He went to Haydock Park and hated the ground, , and then he bled after a couple of miles in the King George, so we were very keen to get a run into him and I think the run has sharpened him up a treat.

“We haven’t missed a beat coming out of it and he’s having a hard couple of weeks now just to make sure he’s fully fit.”

Tizzard added that unlike with Native River, the drying spring ground should play into the hands of Lostintranslation, who was an excellent winner of the 2019 Grade One Betway Mildmay Novices’ Chase at Aintree’s Randox Grand National Festival.

And he certainly feels that dryer conditions could see him outrun his odds on the day. He said: “He won’t mind the ground drying out. He’s the opposite of Native River and likes a bit of good ground. I think he’s a horse who goes well in the spring and I think he’s certainly going in the right direction.

“Last year we were looking forward to going to Aintree and Punchestown and unfortunately we couldn’t, so this year is the same.

“The reason he’s that price is because of this year’s performances. He wasn’t that price after being beaten two lengths in it last year, so he could absolutely outrun his odds.” 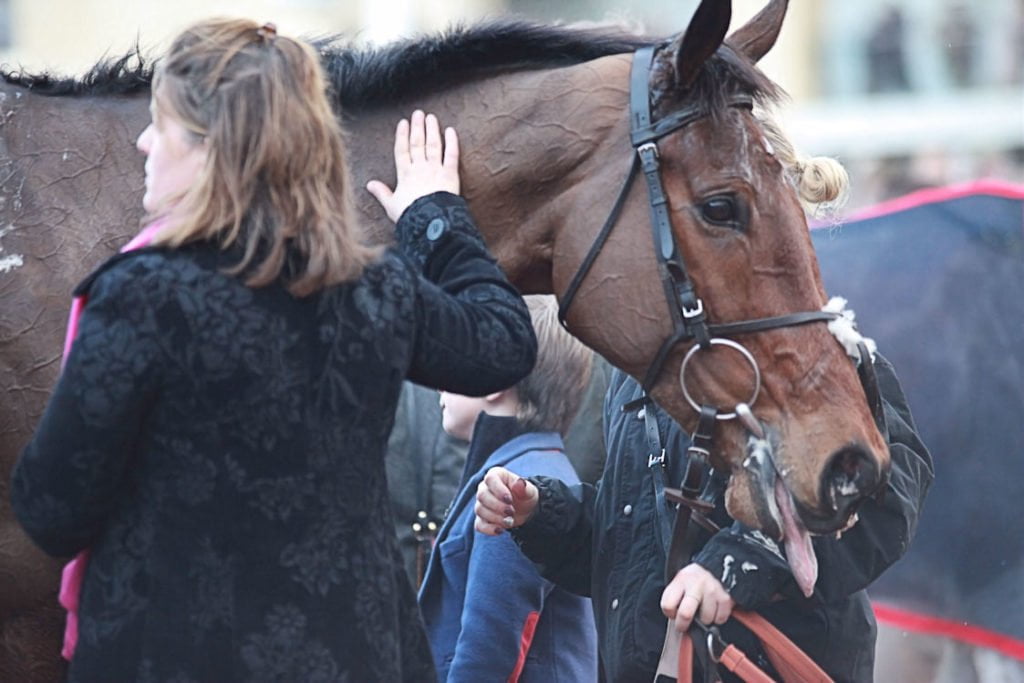 After confirming Native River and Lostintranslation would both be heading to the WellChild Cheltenham Gold Cup, Joe Tizzard, assistant trainer to his father Colin, assessed the stable’s other contenders for The Festival™ supporting WellChild:

“We think he is a very talented horse. Funnily last year he finished fourth (in the Ballymore Novices’ Hurdle), but didn’t travel very well. This year he came out first time and was impressive (in a novices’ chase in November). In the back of our minds, we were very keen to get some racing experience into him and felt we wanted to get to Cheltenham with three or four runs under our belts. We also wanted to get the experience in ahead of next year because he is going to be in the big league. We then went to Exeter and it backfired as he was left to make all his own running and dossed along being outsprinted from the last. We then went to the Kauto Star at Kempton where we had to drop him in and come back to basics. Dan’s horse (Shan Blue) jumped and galloped and got a march on him. At Kempton his jumping got found out over the last four or five fences. But that Kempton run was what we were looking for in between and was hopefully the making of the horse. We learnt more there and this time we can ride him without making the running. Cheltenham should also suit him better. He hasn’t done an awful lot wrong and has won a chase around Cheltenham, finished second in a Grade One over fences and is a horse that is maturing over time. I am sure his time will come and he is going to win or be competitive in these big races.”

“He was a two-mile novice hurdle winner, albeit on heavy ground around Sandown and he just probably outstayed everything. He has not done a lot wrong. He has been second four times on the bounce in great company and stepping him up to three miles last time showed us he certainly stays. He ran in three point to points, won his bumper and is a horse we think will be better the further he goes. He has some high-class form. I don’t think he or The Big Breakaway are particularly ground dependant.”

Eldorado Allen has four entries and is already a Grade Two winner around Cheltenham this season over two miles. I think we will end up going handicapping with him. Shishkin beat him fair and square at Doncaster last time in a very impressive time and I am just thinking we will go for a handicap and being really competitive or, barring accidents, finish third or fourth in an Arkle? We are leaning towards the Grand Annual to be honest – a fast-run two miles should play to his strengths and as long as his inexperience doesn’t catch him out, I think he could be competitive off his mark.”

“I was actually very pleased with yesterday’s run (in the Grade Two National Spirit Hurdle at Fontwell on Sunday). He just jarred himself up a little bit at Cheltenham last year, and we were just looking to get a run into him before Cheltenham or Aintree because he’s very good in the spring. With the frost we haven’t been able to get him away for a gallop at all, which is what we wanted to do, so we used yesterday as a stepping stone and I thought he ran very well. He was staying on very strongly from two out and wasn’t beaten all that far, so the next two or three days are crucial to see how he comes out of that, but if he’s OK we shouldn’t have anything to lose by having a crack at it. In his novice days he beat Brewin’upastorm at Aintree and Sams Profile at Punchestown, so he’s got some high-class form. It looks like Thyme Hill and Paisley Park are the main two, but he’s a very talented horse on his day.”

“He won very well at Exeter last week and is in the Albert Bartlett. He is a three-mile point to point winner and there is a possibility he might go there if he doesn’t go for the EBF Final at Sandown the Saturday before. The rest (of our novice hurdlers) have all just been left in for options really, but I think he’d be our only novice hurdler if we do go down that route with him. It’s not going to be an easier option, it’s just an ongoing conversation between dad and I and the owners at the moment. We’ve kept that option open for a reason, we won the Albert Bartlett with Kilbricken Storm and this horse has been as impressive over hurdles so it’s very much up in the air at the moment.”

“I think Sizing At Midnight will run in the Kim Muir. He was disappointing at Wincanton on testing ground but he’s very much a good ground horse. He was looking like he was going to win the Badger Beers Trophy in the autumn, so hopefully that was just fitness on testing ground and you’d give him a little chance.

“Slate House unfortunately disappointed at the weekend, so he won’t be going there. Copperhead has got the option of the Pertemps Final, but that will probably come too quickly for him to be honest. We’re going to have a select field this year, there’s only going to be 10 runners or so, and that will be about it.”

Dresses for The Races This Summer https://eclipsemagazine.co.uk/dresses-for-the-races-this-summer/